The 5 Most Common Cancers in Men 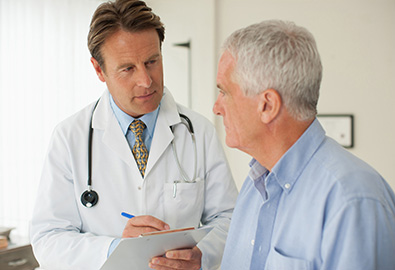 According to the figures published by the National Cancer Registry, 14 percent of men die from cancer, where as 11 percent of women die from cancer. The reason for this is still unknown but doctors believe that women are in some ways biologically more equip to cope with cancer. In spite of this men’s cancers still get relatively less attention then women’s.

The top five cancers that affect American men are outlined below.

Prostate cancer is the most common cancer in men. Symptoms associated with prostate cancer generally only arise when the cancer is at an advanced stage and include straining to pass urine, leaking urine, blood in urine, and pain in one’s bones. Prostate cancer is screened for using a blood test called the PSA test. Treatment as well as prognosis depends upon the age of the person as well as the severity of the cancer. Treatment options include surgery, radiation therapy, and chemotherapy. The cancer risks can be reduced with the help of a healthy diet, weight watch, and avoiding smoking.

Lung cancer does not affect as many men as prostate cancer, but it does claim more lives and is the leading cause of cancer deaths in men. Lung cancer can develop before symptoms are even detected, which is one reason this cancer is so deadly. These symptoms generally include shortness of breath, coughing, chest pain, noisy breathing, coughing up blood, hoarseness, and a change in sputum. Lung cancer is generally screened for with a fiberoptic telescope, sampling sputum, and a CT scan. The five-year survival rate is close to 50 per cent in cases of patients whose cancers have not spread much. The treatment options include surgery, radiation, chemotherapy, or a combination of treatments depending on the type and extent of the cancer.

Colorectal cancer, as the name indicates, is the cancer of the colon or the rectum and is the third most common cancer in men. The symptoms include a sudden change in bowel habits, pain in the stomach, rectal bleeding, severe weakness, and weight loss. These symptoms may not necessarily show up until the disease has progressed to a serious extent. Colorectal cancer can however be detected early through regular colonoscopy screenings, which the CDC recommends getting after the age of 50. The treatment of colorectal cancer depends on extent to which the disease has advanced in the body and includes surgery, radiation, chemotherapy or a combination of these therapies. The patients going through stage I of this cancer face a five-year survival rate of 75 per cent. Regular exercise as well as a healthy diet helps reduce the risk of colorectal cancer.

Bladder cancer is the fourth most common cancer in men, its symptoms include blood in urine, blood clots in urine, changed color of urine, pain during urination, frequent urination, or feeling the need to urinate without being able to do so. If a person is experiencing any of these symptoms, they should consult a doctor immediately as these symptoms are the primary source of detecting bladder cancer. Surgery is the main form of treatment though others include administering drugs directly into the bladder, chemotherapy, and radiation therapy. If detected early, the five-year survival of a patient suffering from bladder cancer is 90 per cent. Smoking doubles the risk of acquiring bladder cancer. A person having a history of bladder cancer in the family must be extra cautious and take the necessary preventive measures.

Melanoma of the skin affects a large portion of the male population. It is basically a malignant tumor of the melanocytes. The dark pigment in the skin – melanin, which is responsible for skin color, is produced by melanocytes. Melanoma skin cancer is extremely dangerous if not found early. It causes a large number of deaths every year and can originate in any part of the body that contains melanocytes. The main symptom of melanoma is a change in size, shape or color of a mole or freckle. Having skin examinations performed regularly can help detect these changes early and prevent any further spread of melanoma. The scalp and soles of the feet should be checked as well as they are often overlooked in self-examinations. Avoiding exposure to sun can help reduce the risk of this particular cancer. If diagnosed with this cancer, treatments often include surgery where the effected mole or freckle is removed and in more advanced cases chemotherapy, immunotherapy, and radiation therapy are administered.

Awareness is the first step to prevention. Get in touch with your doctor to understand any additional precautions that you can take in order to lower your risk of developing cancer. Not smoking, eating a healthy diet, maintaining a healthy weight, and protecting your skin from the sun will go a long way toward protecting yourself from these common cancers.